Home » News & Insights » Leaving a tattoo in your will

Leaving a tattoo in your will

It may be possible to have a tattoo preserved for a loved one after you die, but it may not be legal property. 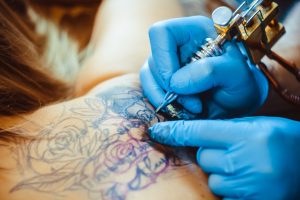 Josh Hawkes, Wills, Trusts and Probate Executive at Jones & Co Solicitors, said that the issue of whether anyone can legally own another person’s tattoo is still to be established in court:

“The possibility of having a tattoo preserved to give to someone else after death became a reality in 2018, when the National Association for the Preservation of Skin Art, an association of tattoo artists and enthusiasts, began advertising its services in England.

“This gives people the opportunity to have their tattoo preserved as artwork for family members after they die, but there is a legal issue over whether this artwork can be owned by anyone.

“The common law principle has always been that a living human body cannot be owned, so a person cannot dispose of their body, or body parts, through their will. So, a gift of a tattoo may not be legally possible.

“However, an exception to this rule was made in Australia when the High Court decided that a preserved human specimen kept by a doctor was property and could be sold by the doctor’s executors after his death. The Australian High Court agreed that a ‘lawful exercise of work or skill’ on a body or body part meant that it was different to a dead body.

“Another court, in England, also convicted a defendant for stealing body parts from the Royal College of Surgeons, agreeing that human body parts are capable of being property when they have a use or significance beyond just existing.

“In both these cases, the body part became property when they were separated from the body. As a tattoo is only removed and preserved after death, there is a big question of whether this can be regarded as property by the courts. There is also a question over whether those executing the will are legally required to order the procedure after death, and if the artwork will become the property of the estate rather than the intended new owner.

“As all these issues are yet to be tested in the courts, it is important that anyone considering leaving a tattoo as artwork in their will understands that this is still an undecided area of law, so their wishes may, or may not, be carried out.

“My advice to anyone thinking of making an arrangement like this is, discuss it first with a solicitor, the intended beneficiary, your executors and other family members. Although the ownership of your tattoo is, for now, an unresolved question, making your intentions clear is a good idea. This may help to reduce uncertainty later on, and at least ensure that everyone involved understands your wishes.”

For more advice or to make an appointment please contact us here.